Under an SE2025 Research and Mission Analysis contract task order, Mosaic ATM led a multi-organizational team that developed the Paired Approach procedure to increase capacity during instrument meteorological conditions (IMC). The Paired Approach procedure is a part of Interval Management (IM), which leverages ADS-B Out for the lead aircraft (or Target aircraft) and ADS-B In for the trail aircraft (or IM aircraft). Mosaic developed the experimental Instrument Approach Procedure (IAP) used for the PA Flight Demonstration, as well as the associated rules for the use of this procedure and concept. Honeywell developed the prototype avionics and Alaska Airlines, United Airlines, and Honeywell provided aircraft during the demonstration. Fourteen PA procedures (seven at SFO and seven at TUS) were performed. Overall, the flight deck IM (FIM) spacing performance was excellent; the mean spacing error at the planned termination point was 2.3 seconds, comparing favorably with the requirement of +/- 7 seconds.

Comprehensive results of the flight demonstration are included in the team’s conference paper, presented by Mosaic’s Kenneth Leiden at the Integrated Communications Navigation and Surveillance (ICNS) Conference in April 2019. Read his conference paper here! Check out video of the actual track data from the SFO trials.

Results of the Paired Approach Flight Demonstration will be transferred from the FAA’s NextGen Office to its Surveillance Broadcast Services (SBS) Office. These results will inform ongoing work for further development of the operational concept. Standards development of the proposed operational concept is currently ongoing in RTCA Special Committee 186 (SC-186) Working Group 4 (WG-4). 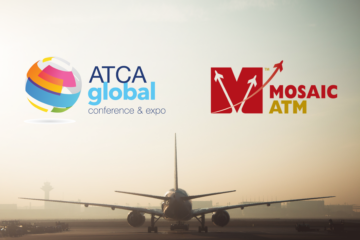